Skip to main content
This is documentation for Olympe Documentation 2.0, which is no longer actively maintained.
For up-to-date documentation, see the latest version (2.3).
Version: 2.0
note

This tutorial goes straight to the point. If you want to get more context around what you are doing, take a look at our Guided Overview, or to our DRAW Reference Guide.

This short tutorial will illustrate the capabilities of Olympe:

Its aim is to allow you to build an app quickly, without spending much time on the underlying concepts. Those can be seen in more details in the Reference guide.

It consists in 4 steps:

Open DRAW and drag-and-drop a Project from the right sidebar (aka the Marketplace). Name the project with your name. In the example below, for training purposes, "My first project" was the chosen name.

Open the project, and create a new application by drag-and-dropping a UI App from the marketplace. Name the application Color Display.

Open the UI App. You now see the screenflow editor, which allows defining the navigation between the different screens. A Home screen is already available, and we only need one screen for this first example. Let's edit it by double-clicking on it.

We are now in the Visual Editor, which allows laying out components such as buttons, labels, forms, maps, etc. For our simple app we will place only two things: a QR Code Viewer and a quote.

Drag and drop a rectangle on the home screen. 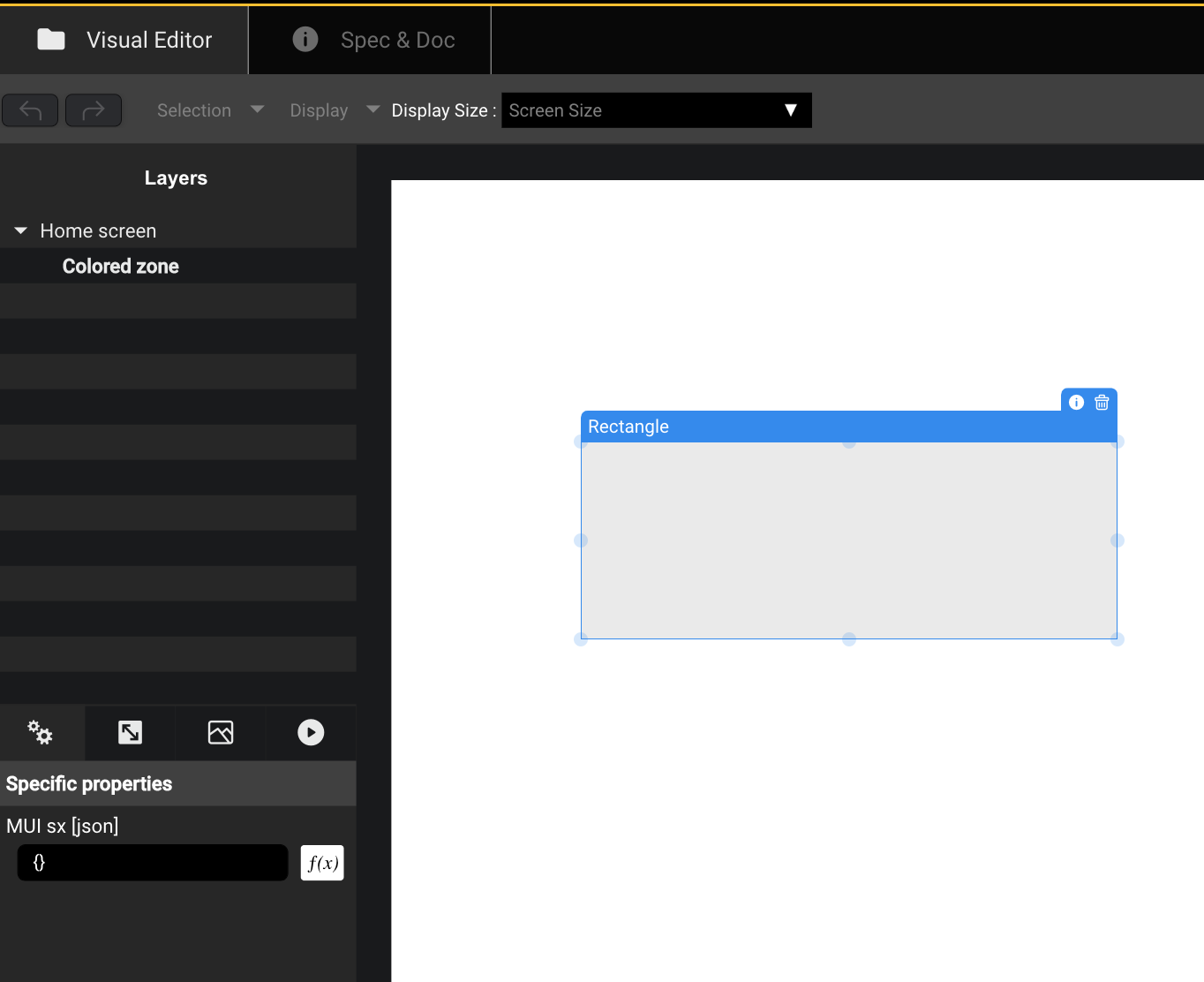 On the bottom left you see the Property Editor, which allows configuring the properties of the rectangle.

In the Layers Editor, change its name to "Quote background". 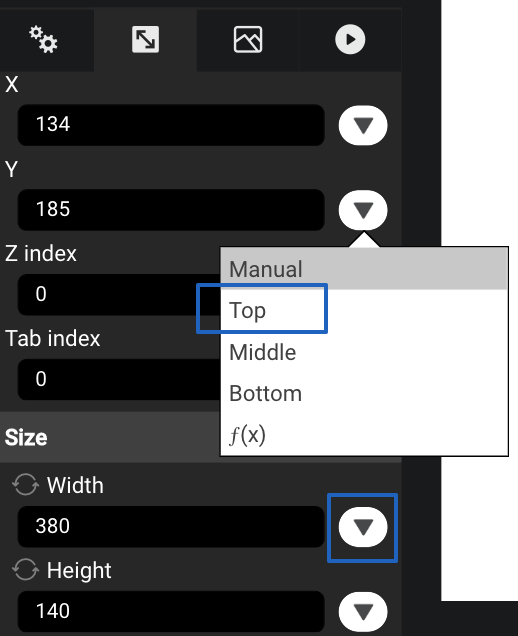 Finally, in the third tab, change the color of the rectangle by setting a Background Color, like the predefined light green. 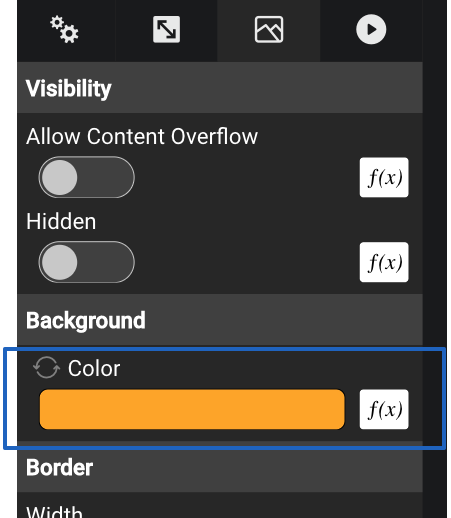 Let's add a Label from the Marketplace that will be our title.

Let's now add a Label from the Marketplace and make it larger. From the Layout Editor, change its name to "Quote". 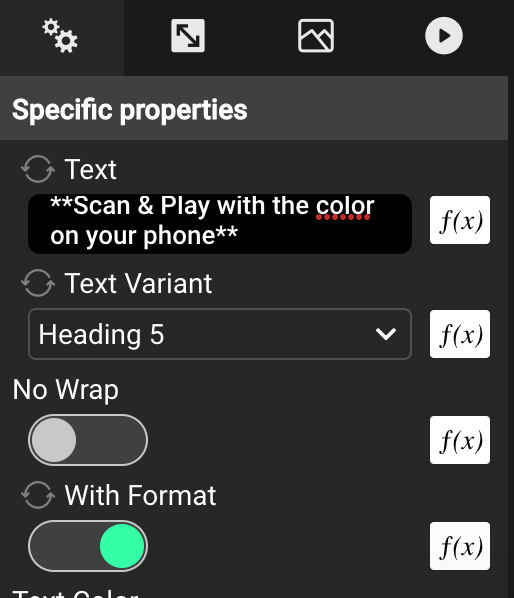 Let's add a QR Code Viewer brick from the Marketplace.

In the first tab, let's create a function for the Foreground color.

Let's now group the quote and the QR Code Viewer by selecting both components with the mouse. In the Layout Editor, under Selection, click on "Group".

Let's modify its properties by going on the second tab:

In the third tab, let's add some CSS property for a better look&feel:

The first step is completed! This is what you should end up with: 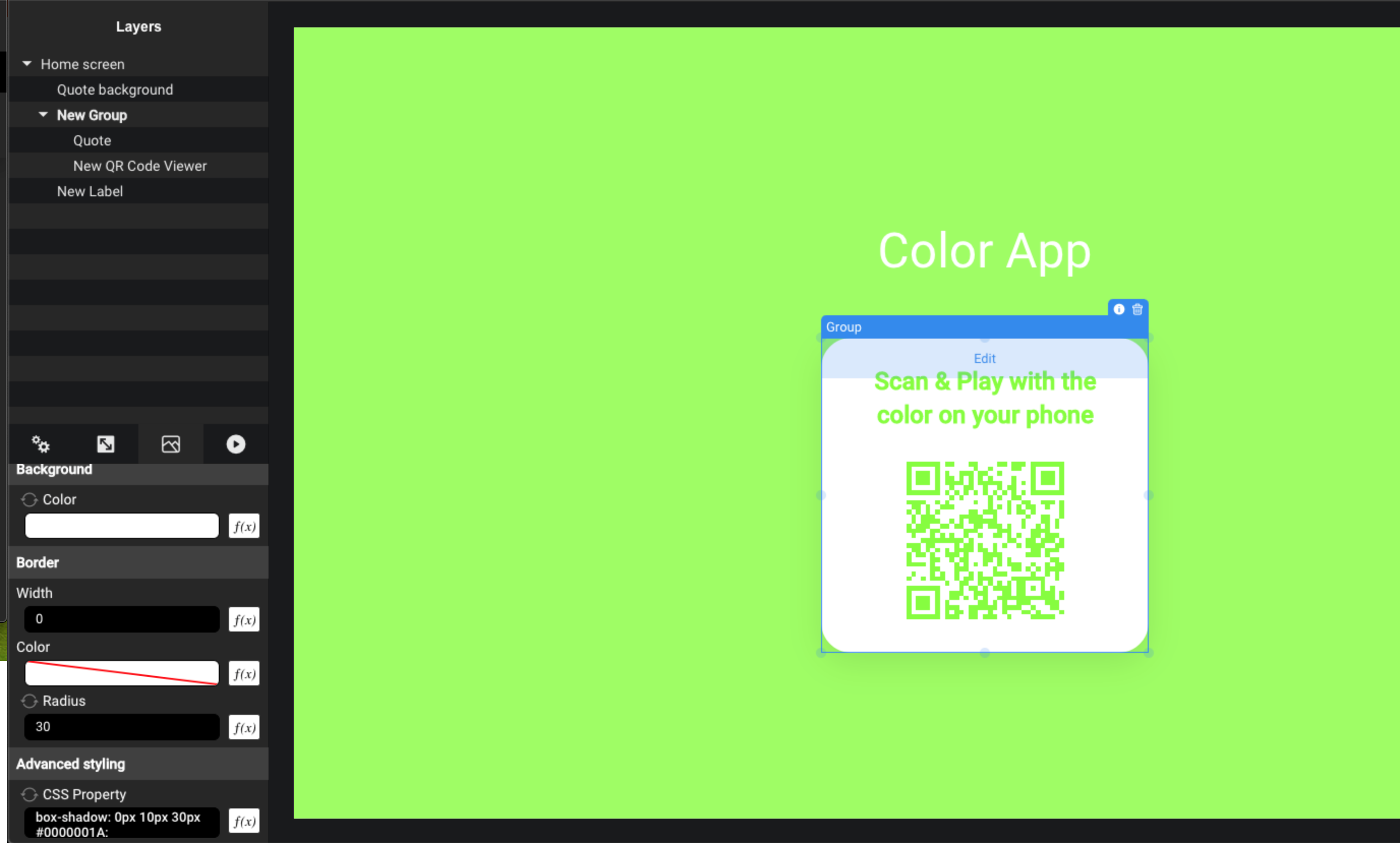 We will come back to these components after we define our Data model.

Now that the display is built, let's make it a bit more dynamic. The color of the rectangle will no longer be set as an absolute value in DRAW, but it will be controlled by another app running on your phone. The goal will be to change the color on your browser by moving your finger on your phone.

This is done by sharing data between your phone and your browser, using your finger will act as a pointing device. We will therefore call this shared data a Finger Position. Our first Finger Position will simply store the coordinates of your finger as x and y.

Open it, and from there you can create a new Data Type. A data type is like a class in an object oriented programming language, or like a table in a SQL database.

Create a function to retrieve the finger position​

We now need just a way to retrieve the finger position. One way to do it is by creating a new Get finger position brick. This is done by adding a new Function to your project.

Then in order to get that value, in our simple case we will simply get the list of all finger positions, and then get the first element in that list. Drag and drop the Get Object List brick from the marketplace on the right, and set model to finger position. Then add a Get First Object in List brick and connect the two. Finally, connect the output of Get First Object in List to the output of the function.

For building our second screen for our Application, let's add a picture that will be later used in that screen.

Let's go back to the root of our Project and drag & drop a Media Library brick from the Marketplace. Inside, we will add a finger picture by clicking on the + button on the top left. You can use this image to download and to upload it inside the Media Library.

Step 4: Build the controller app for your phone​

We now have just one step to go: if we change the finger's position attributes in the data set, the color changes. Let's now build an app that will update the position using our phone and our finger.

In the project view, create another UI App called Controller. This app is very simple, with one touchpad and one Label.

Open the app's screen, and add a new Touchpad.

In the Layer Editor, rename it to "Touchpad".

In the third tab:

Our touchpad will capture the touch events when we move our finger. On the fourth tab of the property editor we can make all possible interactions with our button. The one we are interested in here is On Touch Move. Click on the f(x) icon to add some logic as seen in the image below: 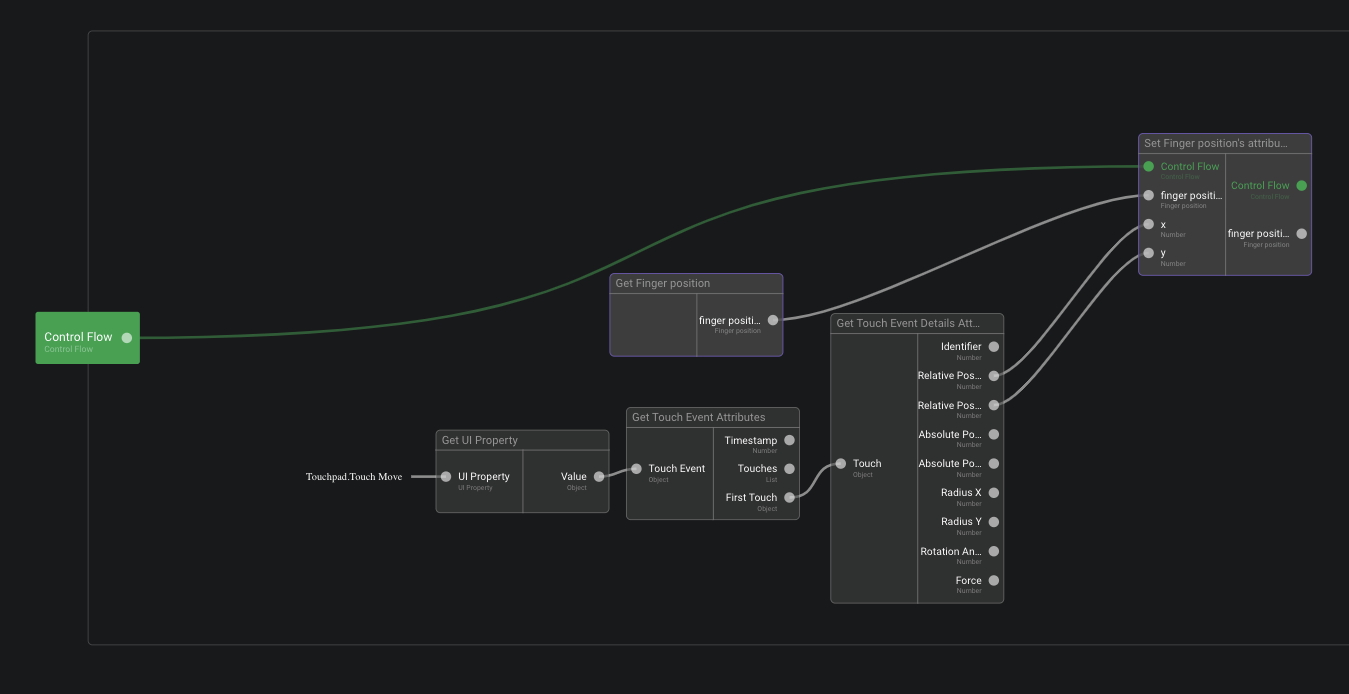 Next, let's add the image that you saved in the Media Library. Drag & drop an Image brick from the Marketplace.

In the first tab, click on Image and select the image that you've uploaded. In the second tab, set X to "Center".

Next, let's add a Label from the Marketplace. In the Layout Editor, rename it to "Label".

Lastly, let's group together the Image and the Label and define its properties as follows:

Option 1: load the Controller on your phone​

If DRAW is deployed on a server (i.e. the URL of DRAW in your browser is like https://some_domain_name.com/), you can simply load the app on your phone by using the Share menu entry on the Controller app, and by scanning the QR Code using your phone's camera (some Android phones may require a dedicated QR scanning app).

If you have deployed DRAW locally (i.e. the URL of DRAW in your browser is like https://localhost:8888/...), you can still load the app on your phone if your phone is connected to the same wifi network. Find out your IP address (Windows, Mac) and use that address in your browser in place of localhost. For example if your IP address is 192.168.0.2, enter https://192.168.0.2:8888 in your browser. From there, use the Share menu entry of the Controller app to display a QR Code which you can scan with your phone's camera.

Option 2: load the Controller in your browser​

Using your browser: open the Controller app and activate the touch mode:

Load the Color Display app in your browser​

In a separate tab, load the Color Display app. Et voilà! When you move your finger on your phone, you change the color in your browser.

You probably noticed that your finger changes the color on the top left of the screen, but once it moves to the bottom right quadrant the color remains white. This is because we simply plugged the position into the color: color components are between 0 and 255. Any position beyond 255 will therefore be converted to a color component of 255. As your phone has a resolution of more than 255x255 pixels, a significant amount of space is considered as white.

This can be resolved by normalizing the position depending on the actual size of the phone's screen. You can create a new function for this functionality. Then use it within the Controller app, in the On Touch Move function.

As a result, the finger position attributes always remain between (0,0) and (255,255), and the color change is continuous across the whole screen of the phone.

Congratulations! You have built with first app using Olympe DRAW and it looks great!

Continue with the next tutorials to take your development skills further!