A workflow defines sequences of states in which the instances of a Data Type go through.

More generally it's the sequence of steps involved in moving from the beginning to the end of a working process.

Synonyms of state could be: step, phase, activity, etc.

(depending of your business logic)

Workflows at Olympe support a number of features and impose some constraints on them for better design.

Let's take a look at some examples.

A very simple example to start with: the workflow of a task in a To-do list.

The task starts in the To Do state, then moves to Doing and then to Done when finished.

The license starts in the To Validate state, then it can go to the Validated or the Refused states.

If some information is missing, the license can go back and forth to the Waiting For Info state. 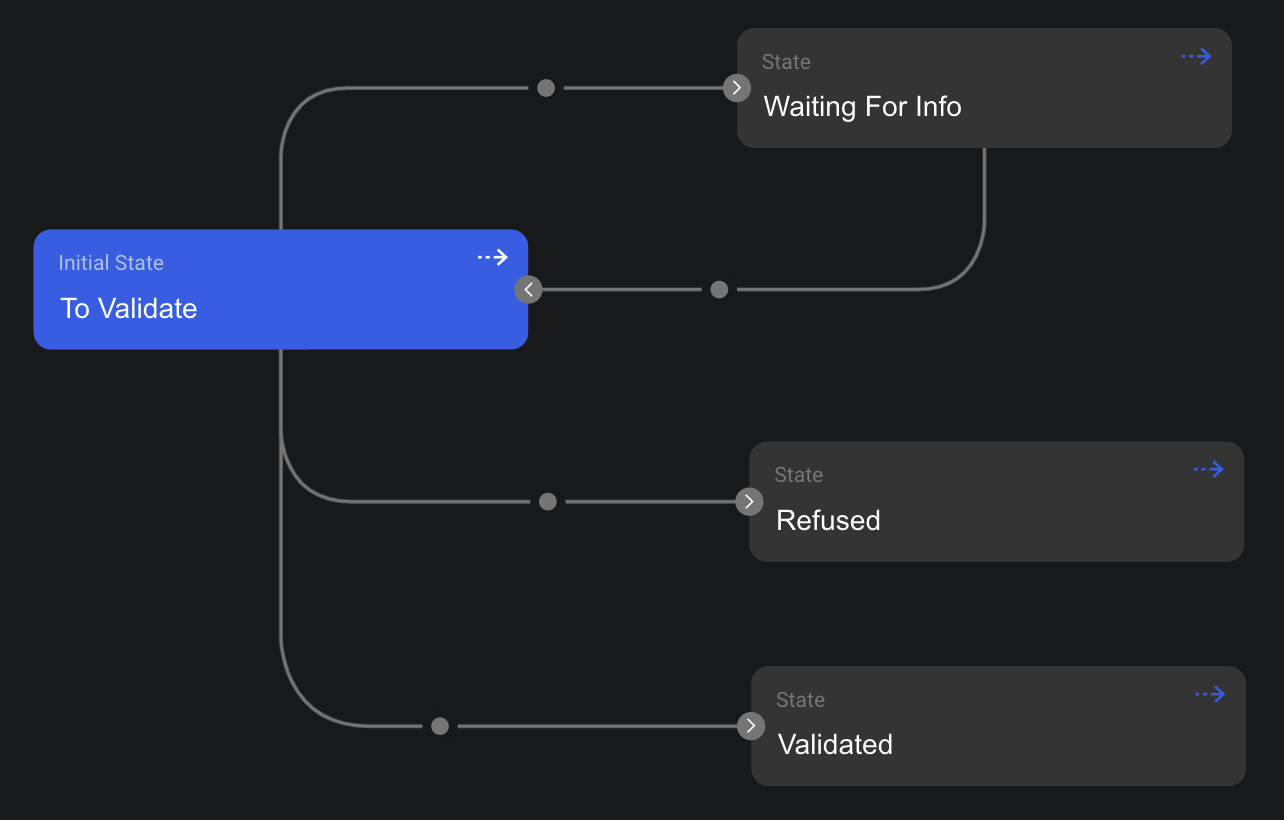 Here we have the steps for an online shopping cart.

The cart can go back and forth until the Payment is Done.

Note also the self transition of the state Shopping, that we can use when adding or removing items to/from the cart.

Note also the optional Discount step used if the user has a voucher for example. 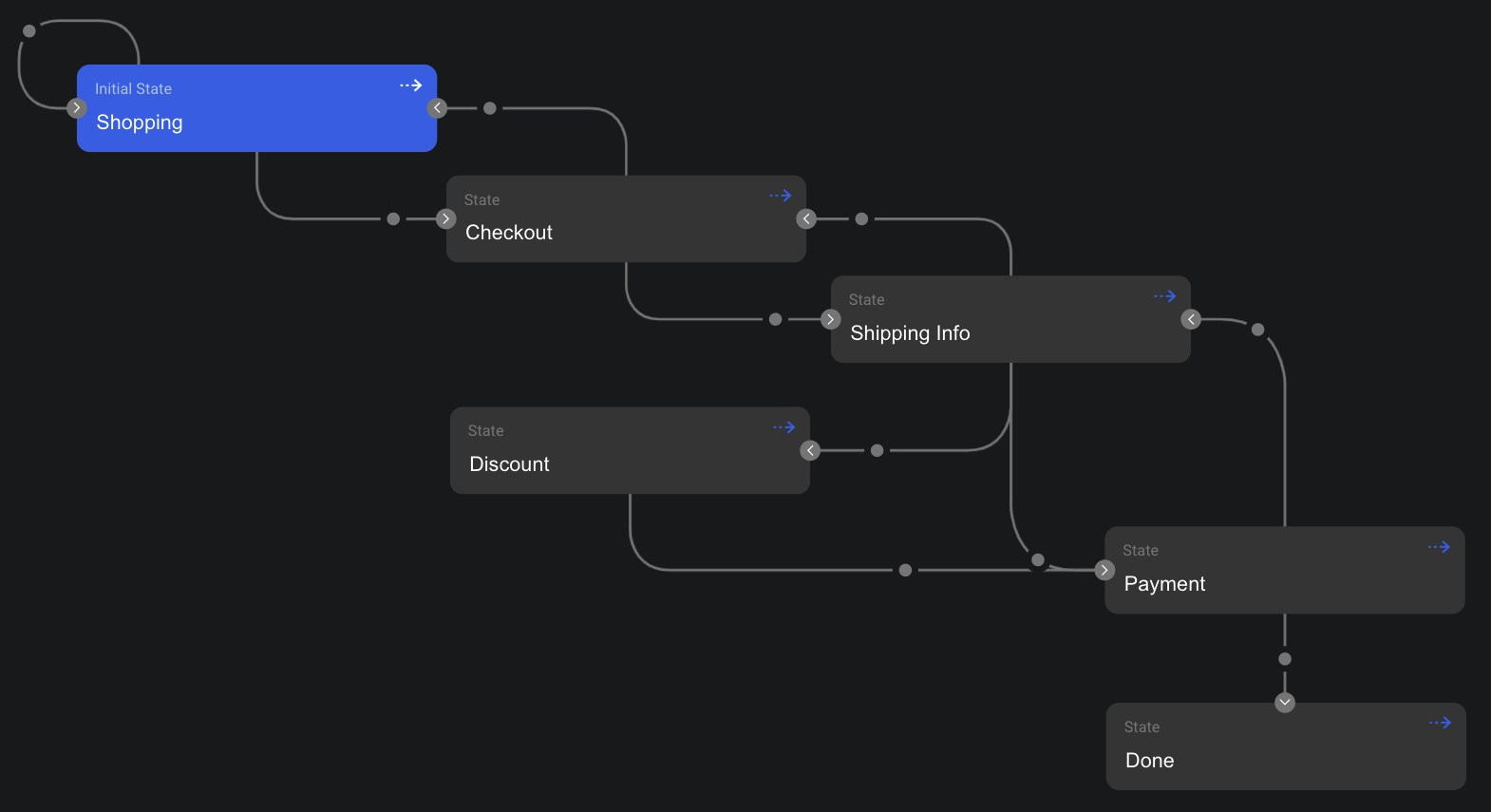 One last example from a project done sometime ago. It was about an online game in which players could create rooms, wait for players to join and then start the game.

The started room (in the Closed phase) was then processed by the game server to handle all game logic. The players also always knew in which phase the server room was (Setup, Running, etc).

Create one by drag-and-dropping the Workflow component from the Marketplace on the right side of the screen into the main editor:

You can then rename it and double-click on it to open the workflow editor:

The Workflow editor looks like this the first time you open it. The State in blue represents the Initial State of your Workflow. There is always one so it is automatically created for you:

In the Spec & Doc tab you can give some information about your Workflow.

There is some configuration of the Workflow you need to do:

Even if the serialization of objects is disabled the Workflow will still historize the object's states, just without the object's values. 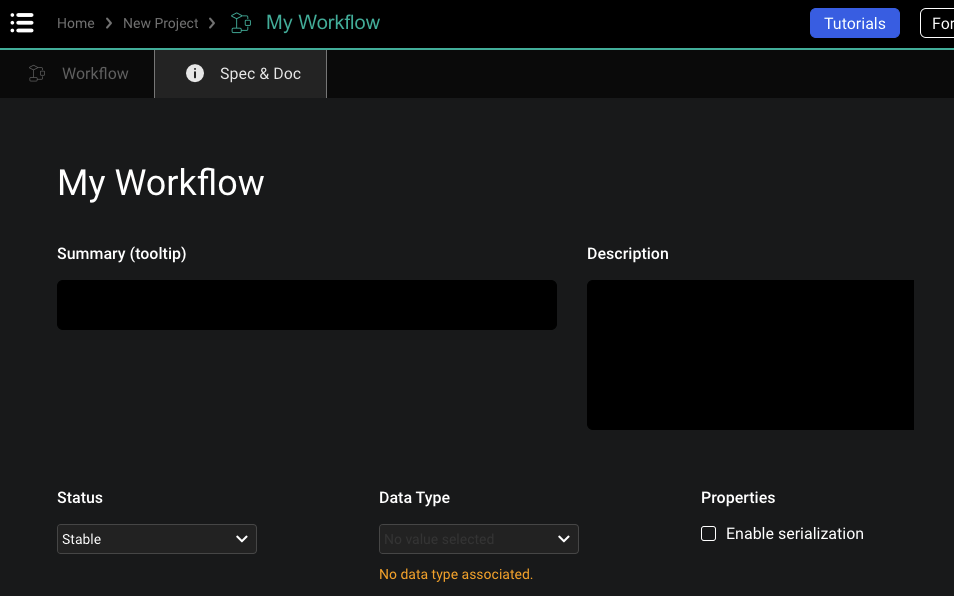 You can now start creating and defining your Workflow States. Simply drag & drop them from the Marketplace: 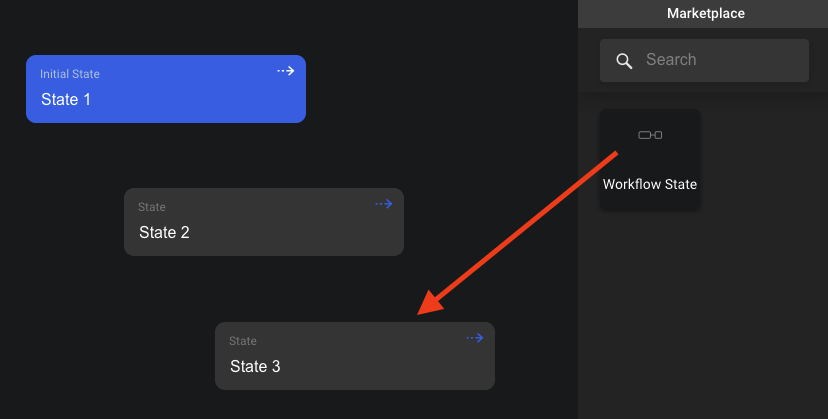 To rename your State, you can select its name and give it the name you want: 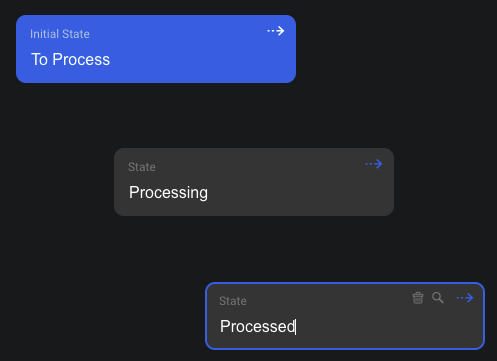 To delete the State or find its usages, just hover your mouse over it and you will see the options at the top-right corner:

Now that we have our States, we can start creating Transitions between them. 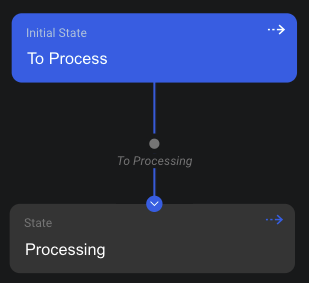 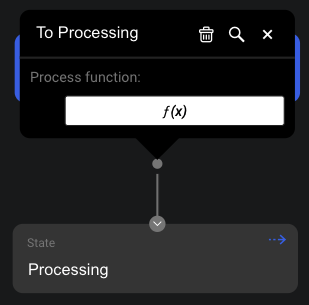 A Workflow in DRAW allows the creation of a self-transition, which is a transition with the same origin and destination State.

To create such Transition, follow the same steps as for creating a normal Transition but release your mouse button when it's on the same State: 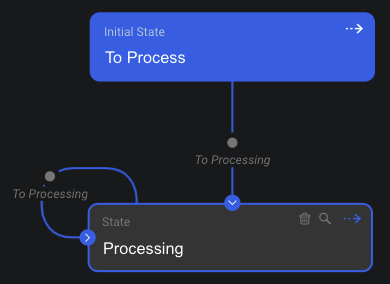 You can define an optional process function on your transitions. This is useful to add logic on transitions, like sending an email, changing the object's properties, do some verifications, etc.

To do so click on the f(x) button in the transition popup we saw above. It will create an anonymous function following this signature: 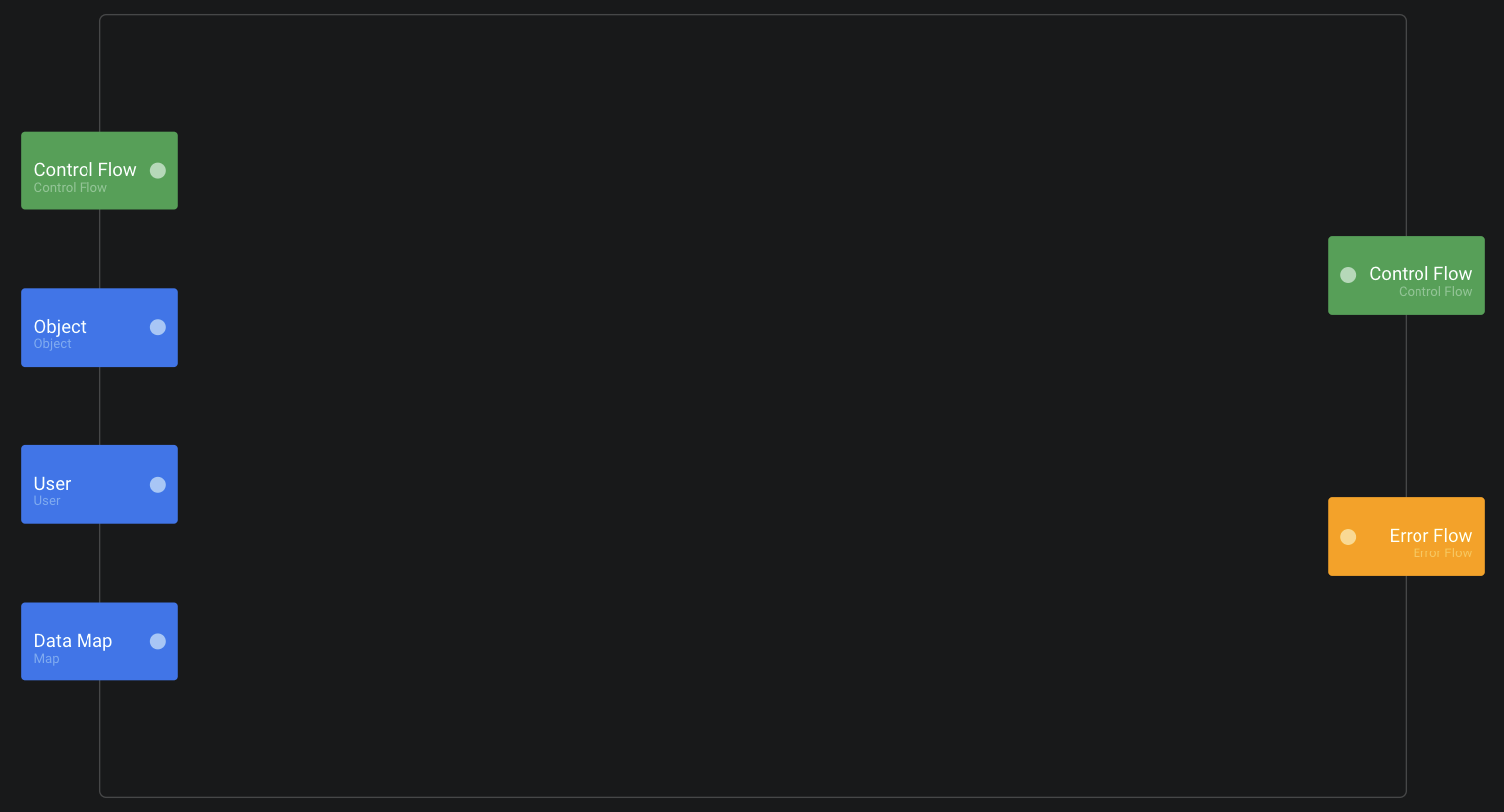 When a process function is set on a transition, the little dot on the transition arrow appears in blue to quickly see it.

Below we show some very useful bricks when it comes to manipulate Workflows in DRAW.

All those bricks are defined in the Marketplace extension extensions/workflow, where you can find also another useful bricks.

All workflow-related bricks start with Workflow: to simplify search in the Marketplace.
The Marketplace content being editor specific, these bricks are available from the Function Editor or Action Editor.

Initialization of a Workflow​

When creating an instance of a model associated with a Workflow, the Workflow is not automatically initialized on the instance.

To do that, you must explicitly use the brick Workflow: Initialize:

It takes the instance as an input and the workflow to initialize (since multiple workflows could be associated with the instance Data Type).

Once the Workflow is initialized on the instance, its current state is the Workflow's Initial State.

Transitioning from one State to another​

To trigger a Transition (transitioning from one State to another), you can use the brick Workflow: Trigger Transition:

You must specify which Transition since the current State may have multiple outgoing transitions.

Note that you can pass an optional Map of data to the Process function.

To get the current object state information of an instance for a specific Workflow, use the brick Workflow: Get Object State:

Check if an object is in a specific State​

Often you just want to know if an instance is in a specific State. To do that use the brick Workflow: Is Object In State:

Get an object history​

If you want not just the current object state but all the history, you can use the brick Workflow: Get Object History:

It will return a Query Result of Workflow Object State ordered by datetime (descending).

You can manipulate workflows in CODE too. This is very useful if you want to do complex logic on them or some logic very specific to your use cases.

To do that CODE exposes all workflow-related models in the Public API:

You can find the full documentation in the file cloud.d.ts.

Here is a diagram of each type and their properties and relations, as defined in the Public API above: 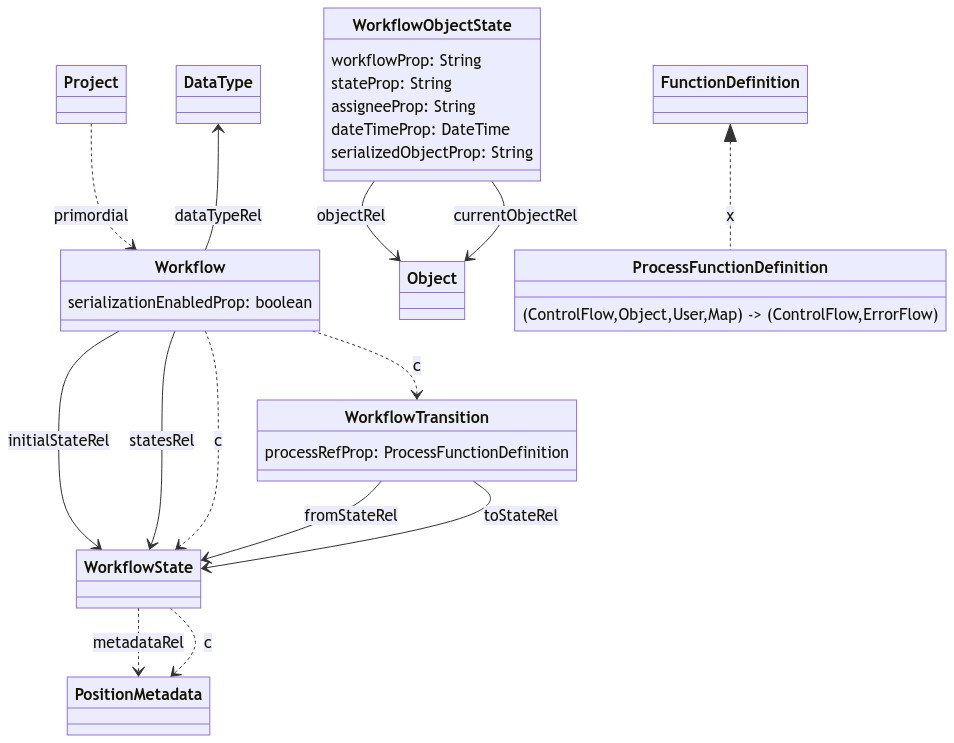